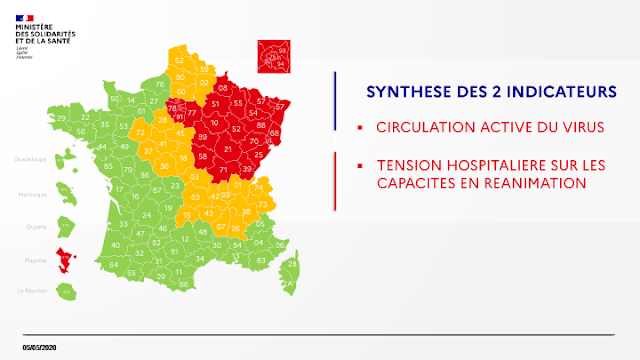 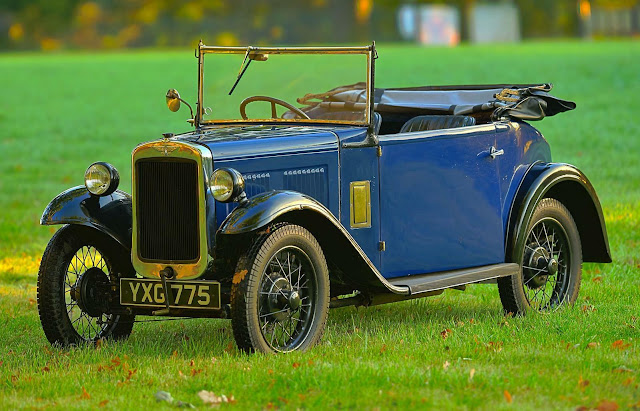 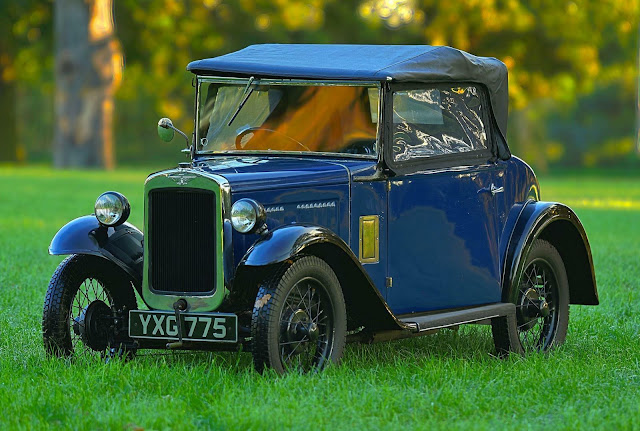 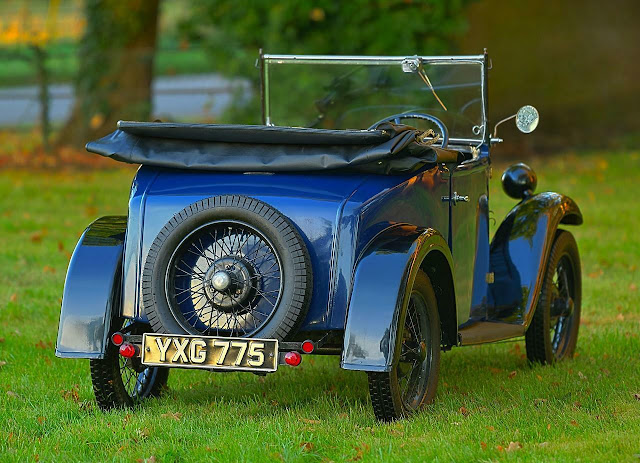 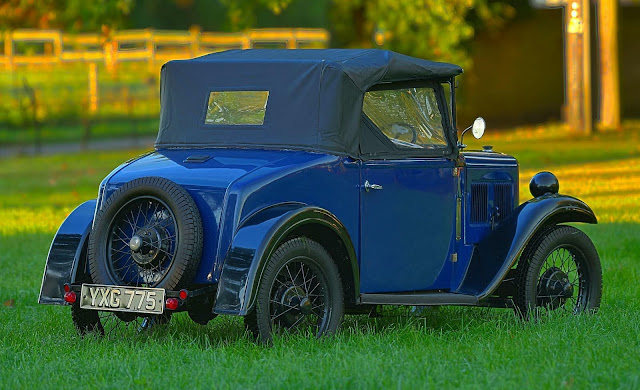 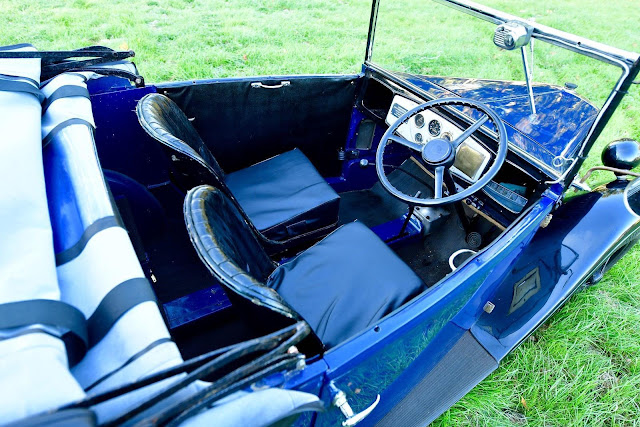 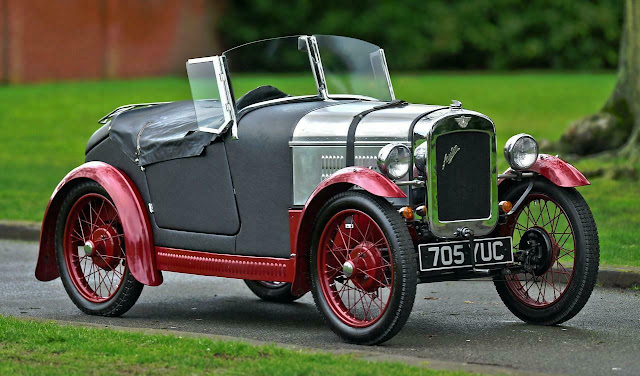 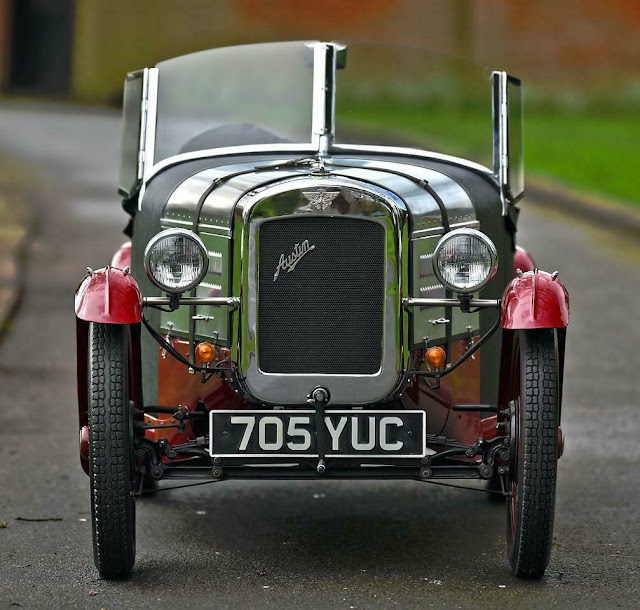 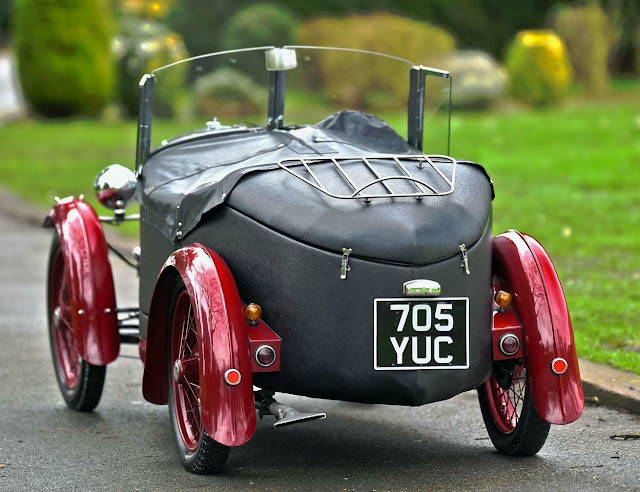 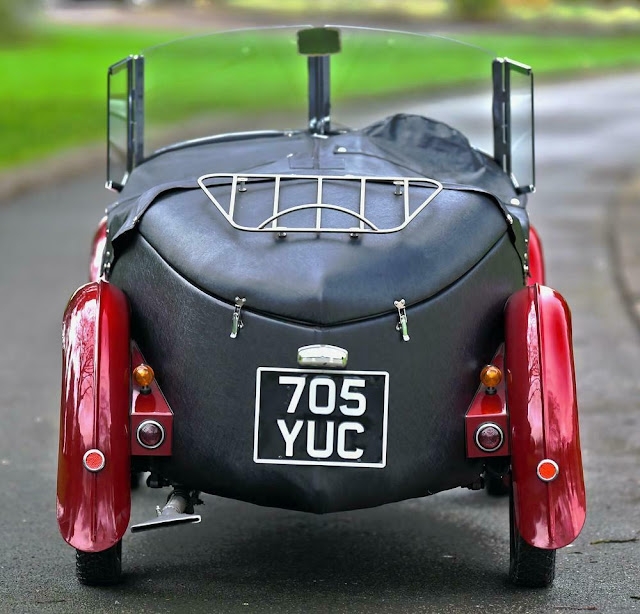 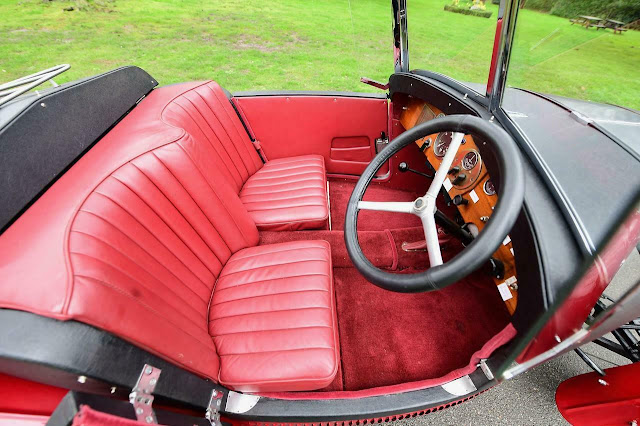 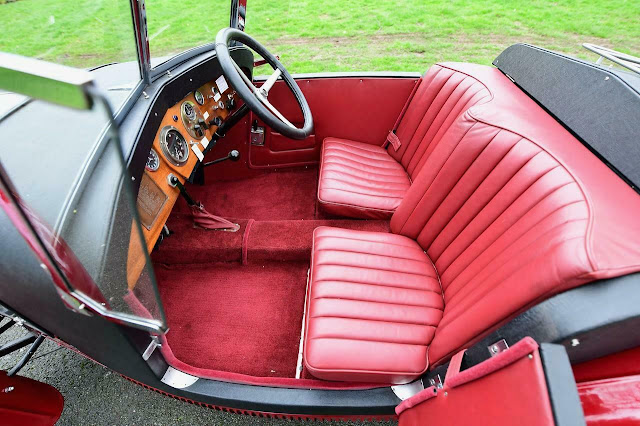 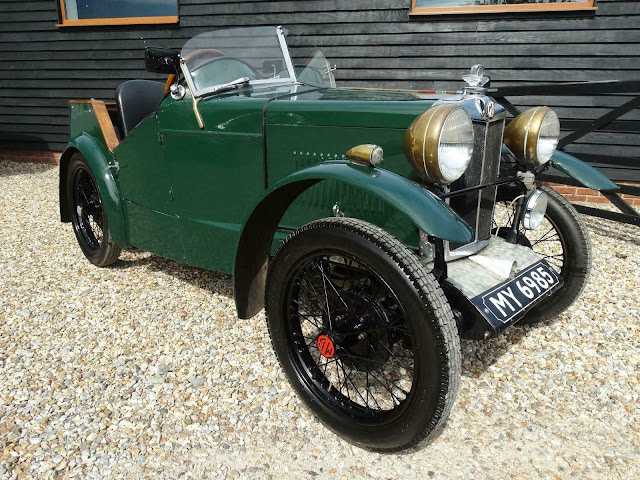 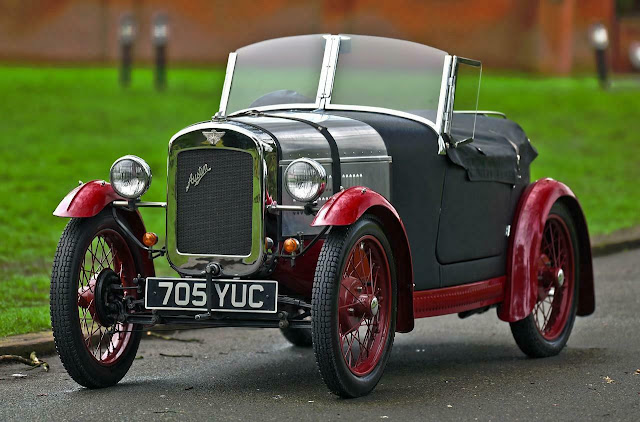 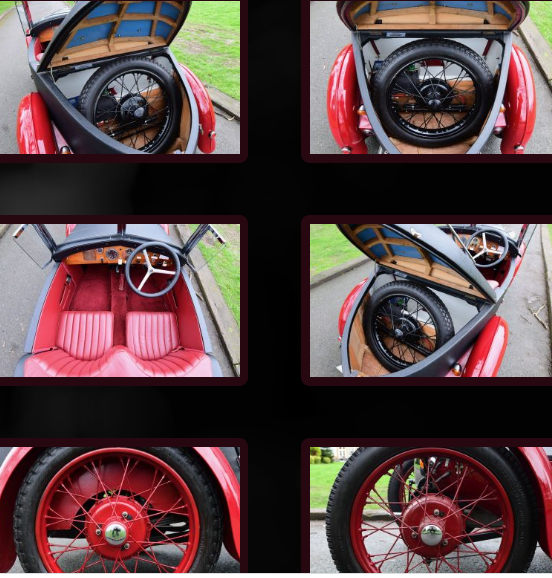 A beautiful boat tail Austin 7 with a body constructed to a Mulliners of Birmingham plan by whom a number of similar cars were produced in period.  The car is in flawless freshly restored condition with few miles put on it since a full rebuild  The car goes extremely well with great power from the dinimutive little engine.  A full photographic file comes detailing minutely its construction.  The car is assembled from an assortment of best available Austin 7 parts starting with a bare chassis.  The car was assigned a period plate due to to paragraph in the DVLA rules stating:

"Vehicles comprising genuine period components of the same specification all over 25 years old will be assigned an age related registrationmark.  The appropriate vehicle enthusiasts club must confirm authenticity of the components."

A Leather bonnet strap holds down the polished aluminium bonnet.  The builder notes that W.O.Bentleys & the like have £140.00 items backed in Lambswool to stop the bonnet paint chafeing.  In the Austins' case a pair of £6.00 gents trouser leather belts from Walsall market did the trick!.  The car is running 12 Volt electrics allowing for decent modern lights etc.  A modern SU carb feeds the engine few by an electric fuel pump.   Pleasingly the wings & metal parts are coach pinted to a high standard.

Please take time to read the paperwork to understand the amazing detail that went into this build.  The car has for example been converted to four wheel brakes with the handbrake operating the rear wheels rather then more usually the front ones.

The body has been beautifully done in an ash frame covered in Black Rexine fabric.  The boot lid flips open to reveal a useful luggage space containing the spare wheel & having room for additional soft bags.  The car comes with a full tonneau cover allowing the car to be zipped closed when unattended.  To the rear is a luggage rack allowing for a hard suitcase to be mounted on it should the new owner elect to do the Peking Paris run or similar!!!

The car sits on 3 nut wire wheels painted in red.  Brand new tyres are found at the 4 corners & the boot stored spare is also brand new.  Foul weather gear consists of.......Well....erm...there isnt any.  The builder notes that he was pleased to find an original 60mph speeometer but can't tell us how much he paid incase his wife reads the ad!!  It was zeroed out when refurbished so the car's first MOT reads 3 miles.  No doubt the builder will be done for clocking cars???

To the interior is red hide thoroughout including seats & door cards.  A matching set of red carpets complete the look as does the polished aluminium bonnet with leather retaining strap along with matching red wings.  A Vee windshield adds to the period look.  A full set of period instruments are mounted in the dash board.  The three speed gear box is easy to use once one masters the reverse layout with first gear being found one one might more usually expect to find 4th.  Reverse is in the 3rd gear position similar to a 3 speed Rolls Royce 20hp.

Simply put: this is an immaculate fully rebuilt & restored car that has seen only shakedown miles since its build.  It is a delight to drive & puts smiles on the faces of all who see it.  Driving it is OK for those of larger stature, but be warned that the racy looks to tend to unleash the inner hooligan in one.  It almost comes into the "Too good to drive" category ! 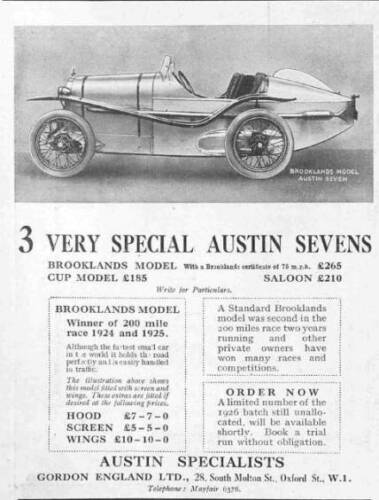 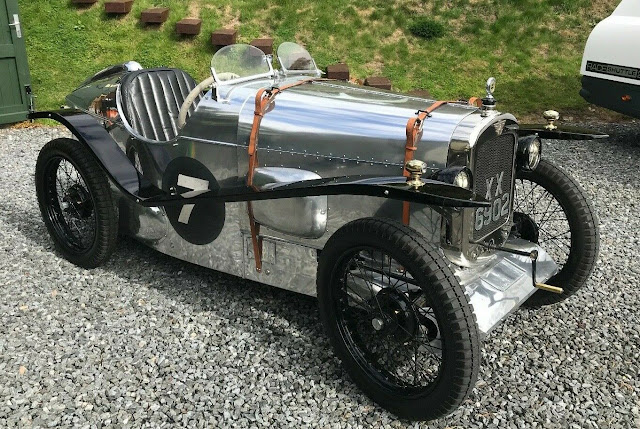 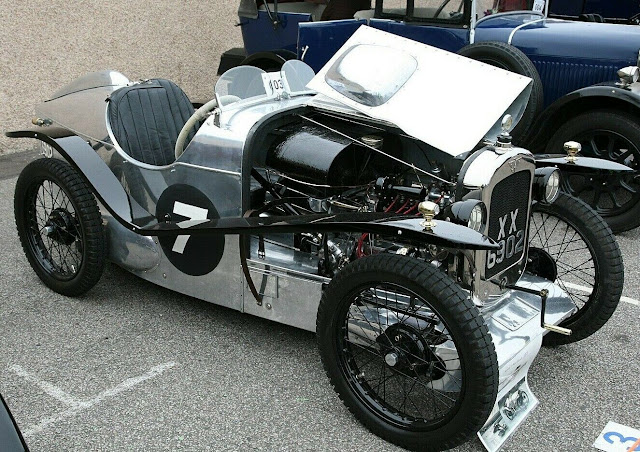 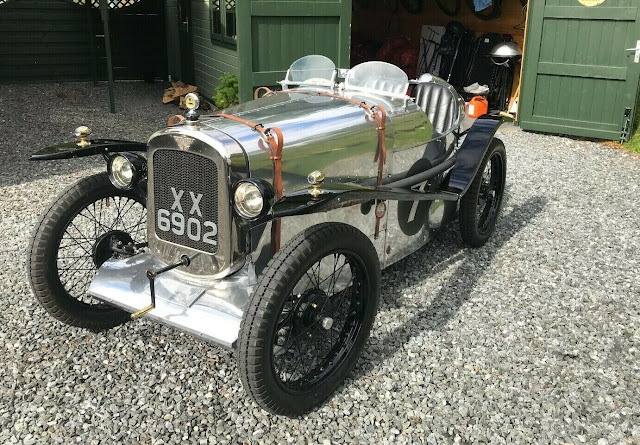 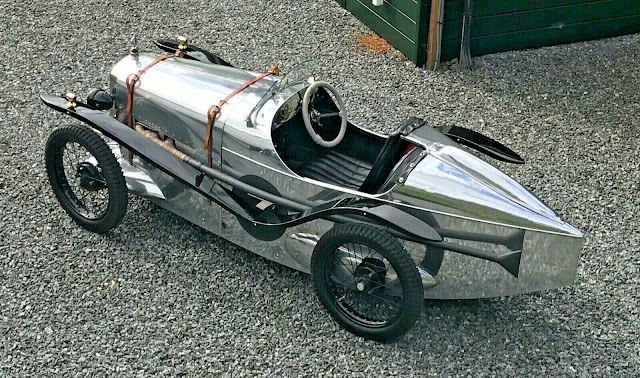 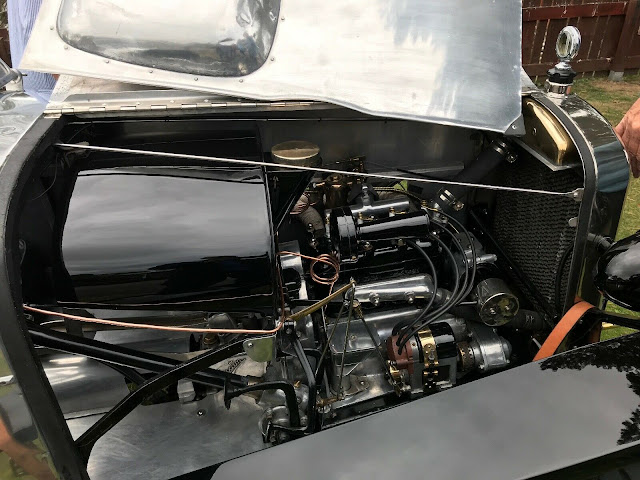 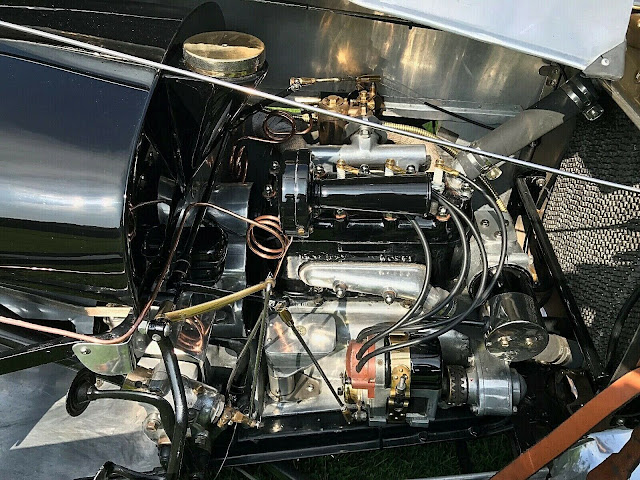 In 1923 Gordon England developed and built a small racing car based on an Austin Seven, the Brooklands models had great success at Brooklands holding many track records. Very attractive replicas were then made available to the public to meet the demand for a small sports racing car built on the popular Austin Seven chassis and these were marketed as the Brooklands Super Sports from 1924.
Early examples had a fabric covering, but the polished aluminium body with boat tail and streamlined fairings soon evolved. Prices were high, costing from £265 without wings and windscreen to £505 fully equipped in 1926, at a time when a Chummy cost just £149.
Tom Abernethy constructed 10 meticulous replicas in the mid 70?s of the ?Brooklands Super Sports? and this car is car number 1 of 10, the remaining cars are in many countries as far flung as Australia & Holland.
I purchased the car 12 years ago and have spent this time improving the Brooklands to how you see it today. The aerodynamic body is polished aluminium, the wings are also aluminium finished in a deep gloss black. From any angle there is something to catch your eye including Desmo wing mounted brass side lights, Brooklands aero screens, bonnet straps in fine leather and Brooklands fishtail exhaust to name just a few.
The interior is finished with beautiful black leather, the passenger seat is offset by 9? to allow the mechanic to achieve the optimum weight distribution during a race, very similar to modern sidecar racing.
To the rear there is a large storage space, this is either accessible behind the passenger seat or by removing the spare wheel, also included in the sale are an assortment of spares, books and tools.
The engine is presented to a very high standard, it starts & runs beautifully and retains the magneto & bronze Solex carburettor. The engine is smooth, powerful, and engineering modifications now ensure it performs without oil leaks. 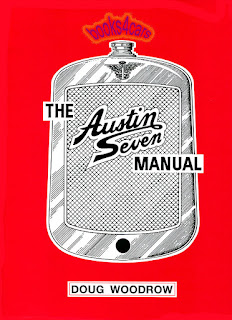