Tiffany lamps are magical artifacts in the collecting world. Illuminate one, and all the creative passion that went into its conception electrifies the viewer today.

This transmitted passion has been the catalyst for great collections formed in the past. Many of the jewel-like lamps are now on display in museums for all to enjoy. But other notable collections have come back on the market, giving today’s appreciative buyers a chance to live with those heart-stopping displays of colored light. 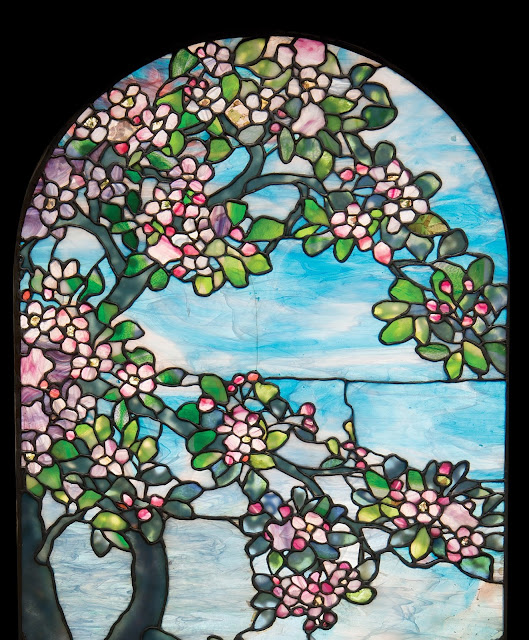 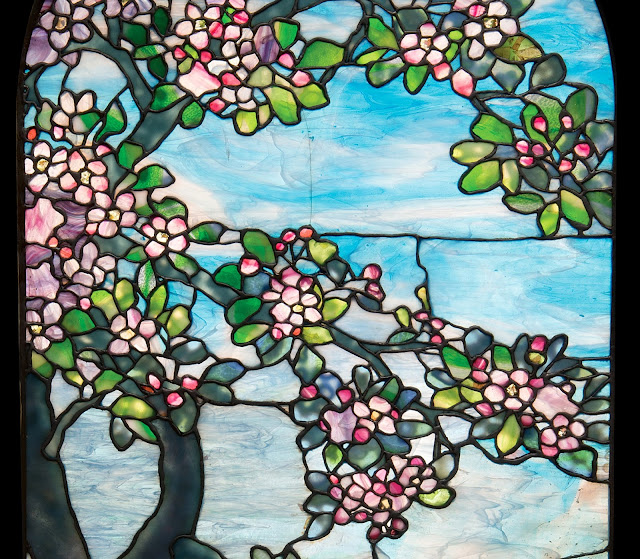 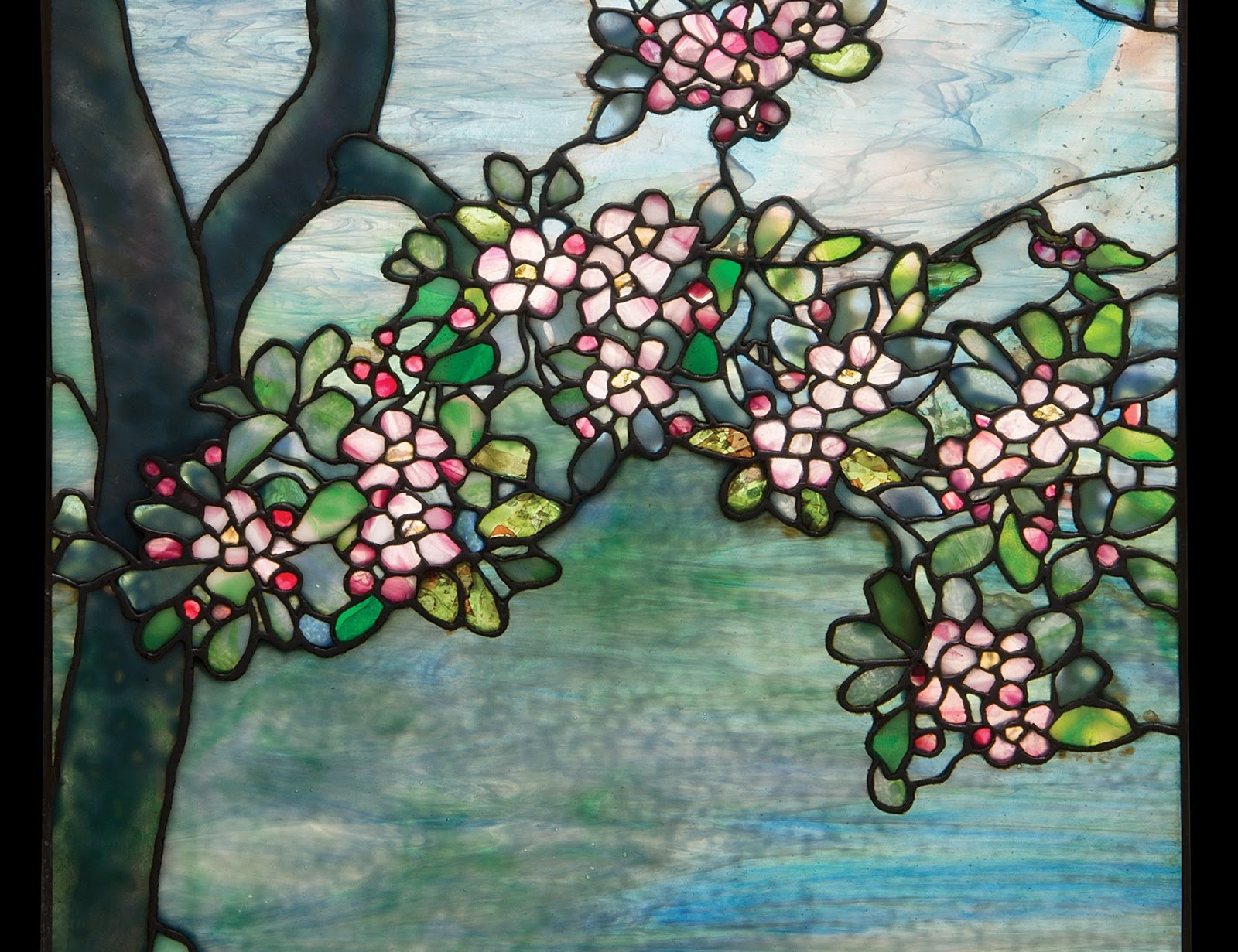 Floral themes with precise renderings of different blossoms were popular for both lamp shades and windows. The Apple Blossom lamp has Tiffany Studios marks on the shade and slender tree-form base. The arched window was originally installed in a home in Fife, Scotland. Garden Museum Collection, Michaan’s Auctions

Allen Michaan and his auction firm in Alameda, California, were chosen to handle the sale of one of the greatest assemblages of Tiffany creations ever amassed, the Garden Museum Collection from Japan. 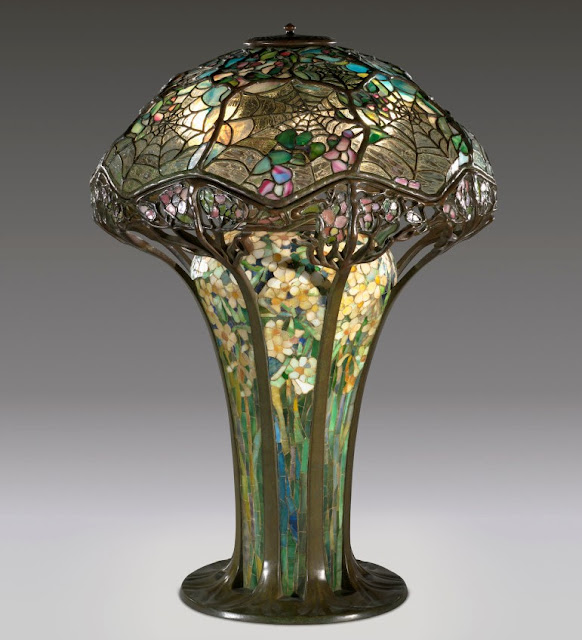 The Venetian/9th Century lamp with its intricate shade and base complements Tiffany desk accessories. Part of the 2012 auction of the Garden Museum Collection from Japan, this example brought $112,100 at Michaan’s. Garden Museum Collection, Michaan’s AuctionsThis landmark collection was assembled by Japanese real estate magnate Takeo Horiuchi with the expert advice of decorative arts scholar Alastair Duncan, formerly a specialist for Christie’s. Duncan prepared an enduring record of the entire collection before its dispersal. Horiuchi not only bought the best lamps, he was drawn to every aesthetic medium that Tiffany explored. The massive volume, Louis C. Tiffany: The Garden Museum Collection covers the entire creative output of the inspired designer from paintings and furniture to mosaics and windows to silver and jewelry. The prolific illustrations of the collection are reinforced by vintage photographs of Tiffany, his family, and the artists and craftsmen of Tiffany Studios. 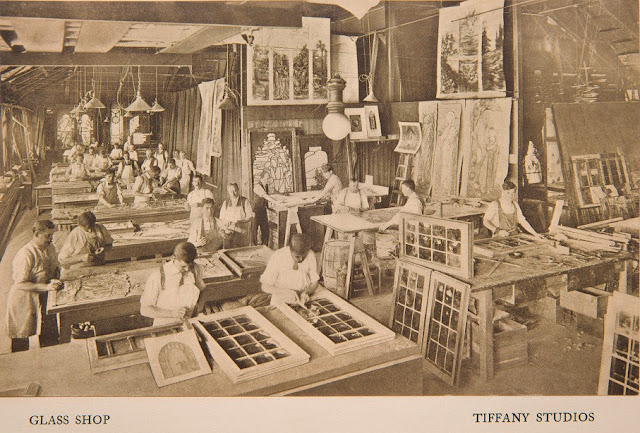 Perfectly suited to the shade’s shape, dragonflies were a popular motif that Tiffany adapted to several lamp designs. From the Malakoff collection, this example has the desirable dropped heads that extend below the bottom rim of the shade and brought $245,000 at Christie’s in December 2014. Courtesy Christie’sLouis Comfort Tiffany (1848-1933) was born into a privileged and successful family. His father, Charles L. Tiffany (1812-1902), had left Connecticut in the 1830s to open a luxury goods store featuring fine jewelry and silver in Manhattan. Every couple who visits the Tiffany website today can see legacy photos of the “King of Diamonds” and his 19th century showroom. Although Charles sent his son to military academies, Louis came out determined to be a painter. His talent is demonstrated by the late 19th century oils and watercolors inspired by his travels, including some excellent Orientalist views of Algiers with emphatic light and shadow.

Introduced around 1900, the Cobweb or Spiderweb lamp was one of Tiffany’s most intricate designs. The broad mosaic-decorated base originally held combustible fuel while later examples were illuminated with three electric lightbulbs. Difficult to produce and expensive to purchase when made – a steep $500 – the design is at the top of any collector’s wish list. Courtesy of the Virginia Museum of Fine Arts 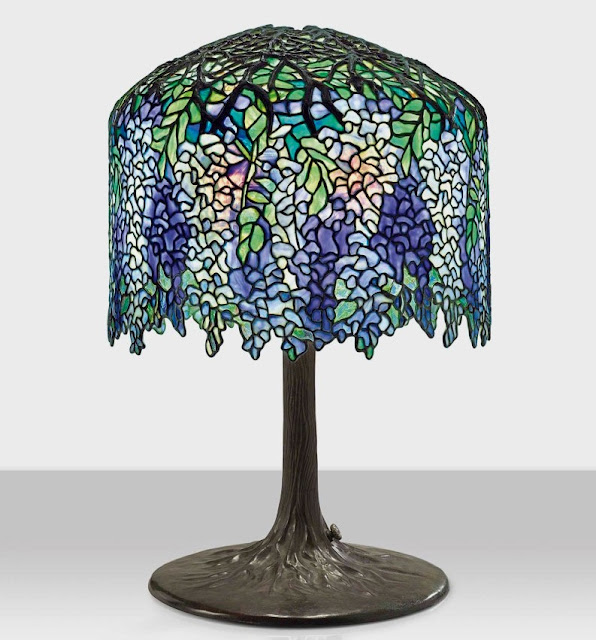 A turning point came in the 1870s when Louis C. Tiffany became fascinated with the properties of glass, an interest that he expressed in architectural windows for domestic and ecclesiastical properties, glass-shaded lamps, and formulas for art glass. Drawing on influences classical and exotic, Tiffany developed a well-defined aesthetic style and became sought after as an interior designer, a career where he could put his love of glass into play. In 1882, President Chester Arthur asked Tiffany to spruce up the White House, for which he created gas light fixtures and a fabulous stained glass screen wall for the Entrance Hall. Sadly, there can be no time machine tour of all the rooms he decorated. Vintage photos exist, but President Theodore Roosevelt changed everything out again when came to office. 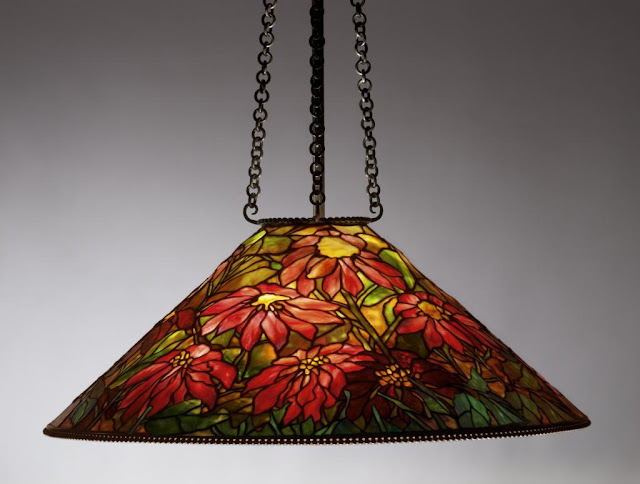 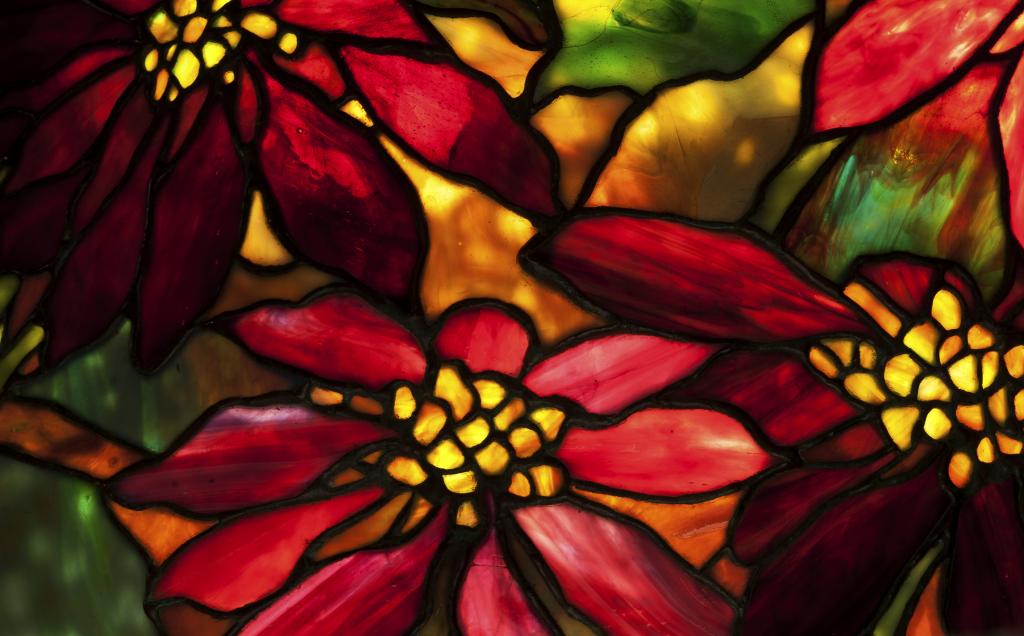 Tiffany’s first lamps were made in the late 1890s, some still using combustible fuels. He had his own glassmaking company by this time. In 1902, he named his multibranched firm Tiffany Studios, while he also served as design director for the family Tiffany & Co. brand. Tiffany Studios had their own showroom at 45th and Madison in New York. A vintage photograph from the early 20th century shows a varied display of windows, hanging light fixtures, and lamps integrated into elaborate desk and table settings. Other early images show teams of men and woman assembling thousands of pieces of glass into lamps and windows. 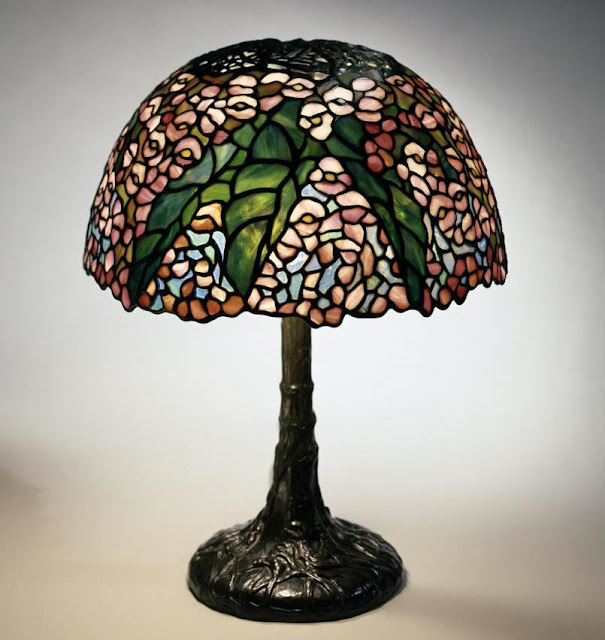 While Tiffany designed some lamps himself, he employed many talented artists including favorite Clara Driscoll, creator of the popular dragonfly designs and head of his Women’s Glass Cutting Department. In 1904, The New York Daily News named her as one of the few American women earning over $10,000 a year. Alastair Duncan illustrated the Garden Museum example of her dragonfly and Water Lily lamp with a mosaic base, noting that it was once owned by Barbra Streisand. Sold for $90 at the time of its manufacture, the 16-inch lamp would have been in vogue on a writing desk or dressing table in a well-to-do household. Although out of style by the time Louis C. Tiffany died in 1933, the lamps almost immediately began a climb back into fashion driven by serious dealers and collectors, a fascinating tale that Duncan chronicles in his introductory chapter. Enthusiasts included celebrities like Streisand, and major auction houses began to organize sales around the lighting.

In addition to table models, Tiffany made hanging shades for ceiling fixtures. The Neustadt collection of Tiffany Glass, New York

A detail of the Poinsettia shade, circa 1902, reveals the subtle coloration within individual glass pieces achieved by the firm’s artists. The Neustadt Collection of Tiffany Glass, New York

Hugh F. McKean and his wife, Jeannette, were among those passionate collectors and became the saviors of architectural material from Tiffany’s estate, Laurelton Hall, now on view at the Charles Hosmer Morse Museum of American Art in Winter Park, Florida. In his book on The “Lost” Treasures of Louis Comfort Tiffany, McKean opens the chapter on “Lamps” by writing about the artist’s love of light, color and glass: “When all things are considered, his lamps were an inevitable development in his career. … Lamps were one art form that offered an opportunity to satisfy all three desires. … Obviously the shades were made on an assembly line basis, and obviously Tiffany viewed the matter with sensible satisfaction because a lot of beauty was going into American homes and a lot of sales were being entered in his books.”

On view elsewhere in New York are highlights from one of the earliest modern collections of Tiffany lamps and windows. In 1935, when less prescient collectors were occupied elsewhere, Dr. Egon Neustadt and his wife, Hildegard, bought their first Tiffany lamp – a Daffodil design – when it was just “secondhand,” not antique.

Lindsy Parrott, director/curator of the Neustadt Collection, said, ”Because he started collecting so incredibly early, at a time when these things were much more affordable, he was able to get so many superb examples, not just lesser examples that were in his price range. He had such incredible vision and foresight to recognize the beauty that these works of art possessed when they were being tossed out because tastes had changed so much. You just have to hang onto these things and be patient because they will come back around.”

“Provenance is really becoming more important for collectors. You want to go back as far as you possibly can – when was it inherited, what’s the story behind it…”

Dr. Neustadt gave part of his collection to the New-York Historical Society. A new installation of the lamps will open in 2016, but all examples can be viewed online. The rest remain with the Neustadt Foundation. 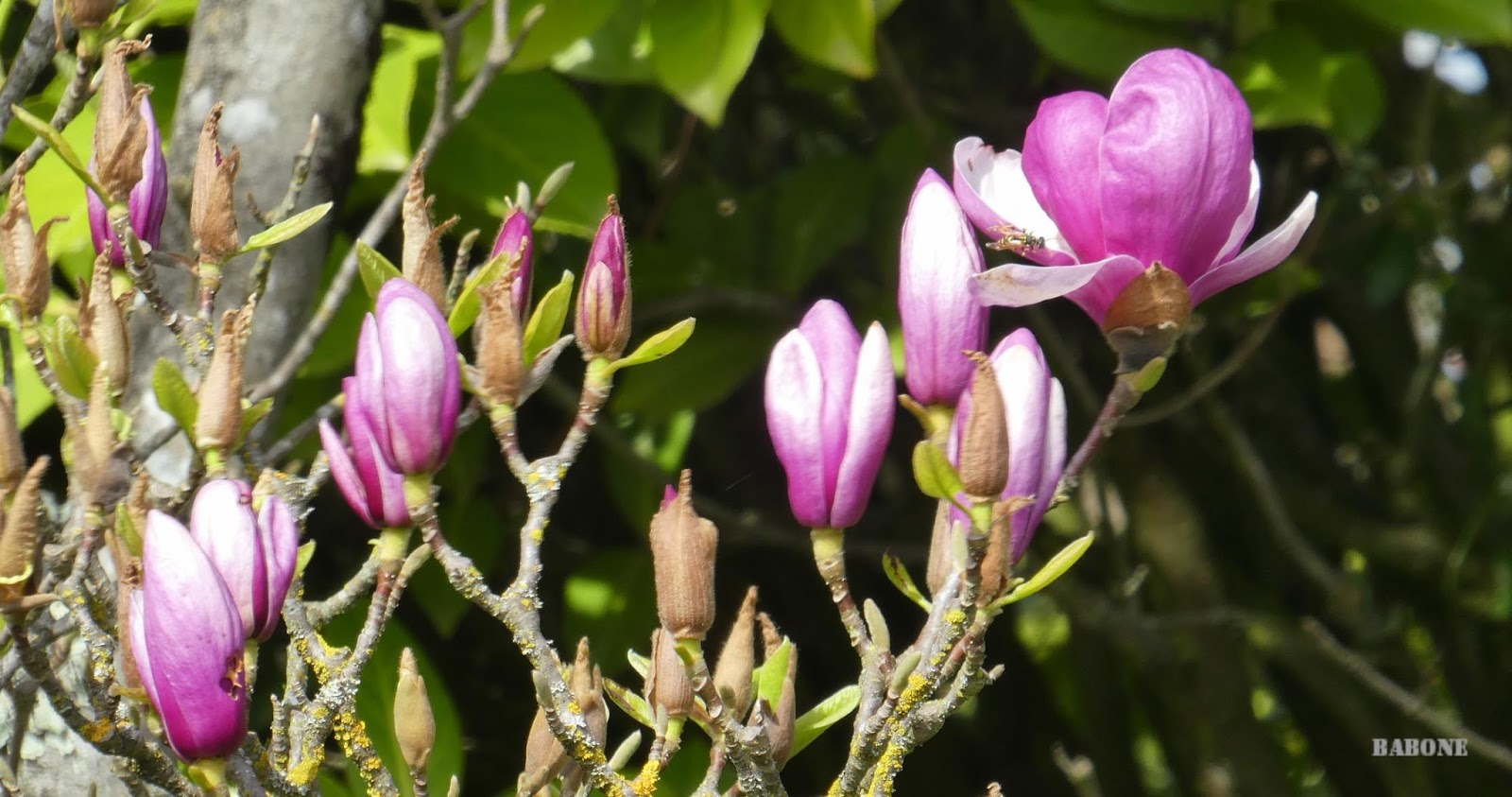 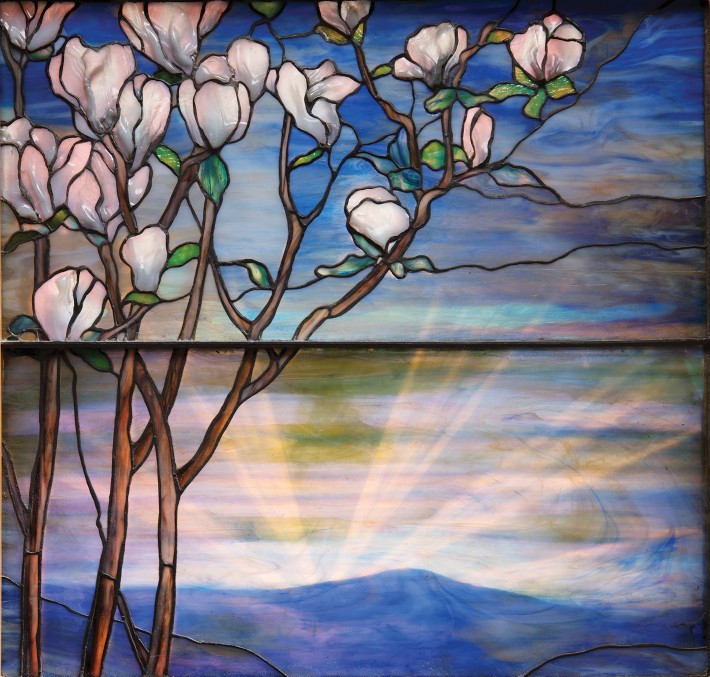 Parrott added, “We are a museum but we don’t have a formal building. We have a partnership with the Queens Museum, where we have this new gallery that opened two years ago. We’ve reinstalled portions of the collection there and we present changing exhibitions in that space, currently ‘Shade Garden: Floral Lamps from the Tiffany Studios.’

Dr. Egon Neustadt and his wife, Hildegard, were pioneering collectors of Tiffany glass. On exhibit at Winterthur, ‘Tiffany Glass: Painting with Color and Light’ presents five windows and 19 lamps, including this Begonia reading lamp. The Neustadt Collection of Tiffany Glass, New York
“Then we also share our collection with a broader audience; these traveling exhibitions allow us to expand the discussion beyond admiration of the individual objects and began to talk about connoisseurship. We have this collection with such extraordinary depth and breadth, even multiples of a single lamp design. We can really begin to talk about what makes a good Tiffany lamp and what makes an extraordinary Tiffany lamp.”

The latest touring exhibition, “Tiffany Glass: Painting with Color and Light” features 19 lamps and five windows, on display at the Winterthur Museum through Jan. 3, 2016. A series of lectures accompanies the exhibition, and the museum has put together a companion show, “Tiffany: The Color of Luxury,” with objects drawn from their own collections.

Christie’s New York has long held the world record for a Tiffany lamp at auction. The Pink Lotus lamp sold for $2.8 million in December 1997. The leaded glass outer shade with a continuous frieze of water lilies is open at the top to reveal a set of eight small Favrile glass shades within. Only three examples of the form (h. 34 3/4 inches) are known. Carolyn Pastel, senior specialist in 20th Century Decorative Art and Design, talked to Style Century about the current market for Tiffany lamps: “They’re not all equal. Tiffany had a tremendous output. You have a lot of material to potentially collect from Tiffany at various price points.” 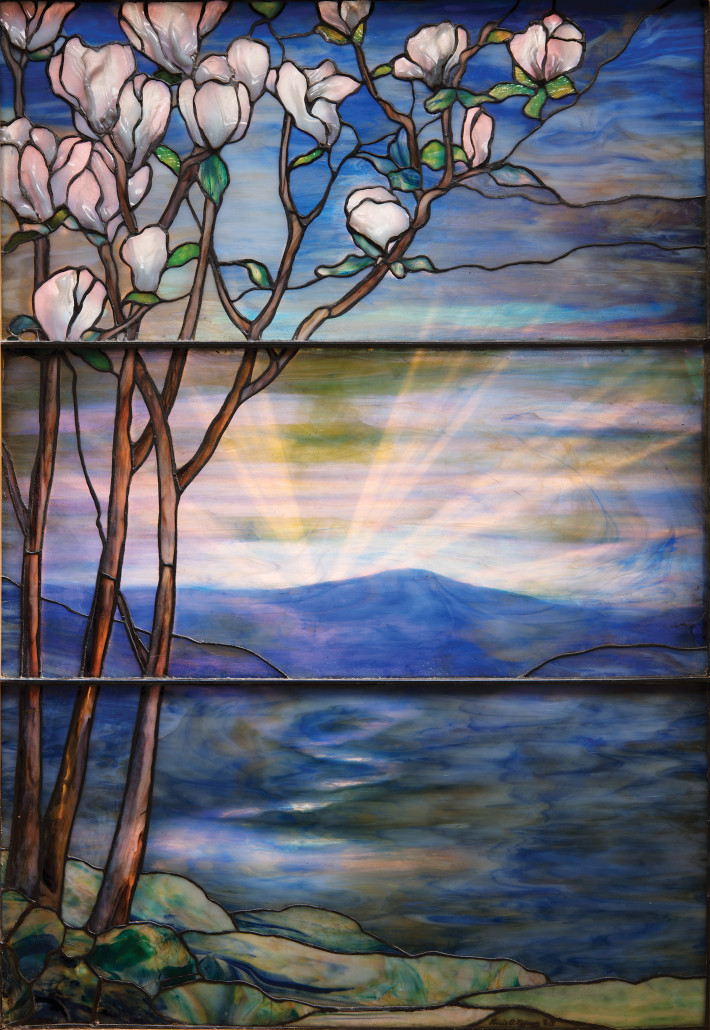 What determines value? She continued: “In terms of collecting, you are looking at rarities, for sure. Top works, such as the Wisteria lamp, are very sought after. There was definitely limited production because it was a very difficult piece to make. Do we have the exact number? – no, but over time you can make a general assessment of how many were made. For the Lotus lamp, we know only a few were ever made. On the other hand, many Dragonfly lamps were produced because that design was tremendously popular. There are variations in the size of the shade as well as the dragonfly.”

Good condition is important as well. Cracks may exist, but they should not be distracting to the eye. Exact colors vary from shade to shade, and buyers can be choosy about which hues they prefer.

Pastel emphasizes the importance of a lamp’s past history: “What you’re seeing now with the Tiffany market is that provenance is really becoming more important for collectors. You want to go back as far as you possibly can – when was it inherited, what’s the story behind it – as many details as possible. The Lotus lamp was quite amazing, it had been owned by the Wrigley family – that added a layer of interest and intrigue. There is a constant flow of new interest for this icon of American art.”
Cherished in great collections over the past 80 years, Tiffany lamps stand poised to arouse the passions of a millennial generation.

About Karla Klein Albertson : Karla Klein Albertson focuses on the decorative arts, from excavated antiquities to contemporary pop-culture icons. She currently writes the Ceramics Collector column and exhibition features for Auction Central News, covers shows and auctions for the Maine Antique Digest, and authors the Antiques column in The Philadelphia Inquirer. She holds a master’s degree in classical archaeology from Bryn Mawr College.